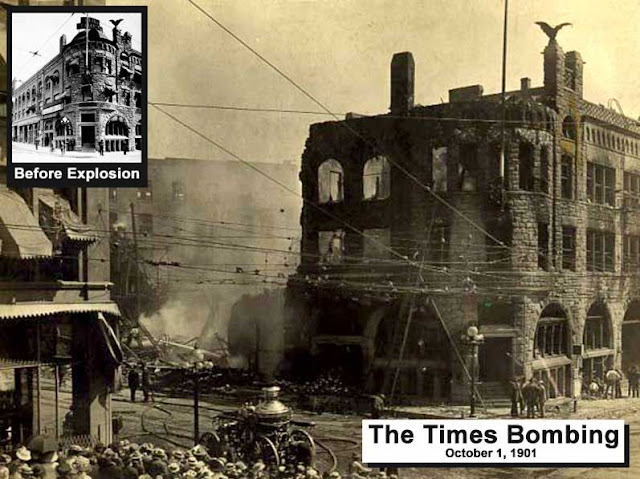 1910: The Los Angeles Times building in LA on 1st and Broadway is dynamited by terrorists; 21 killed, over 100 injured; national labor movement outraged by the arrest of unionists, then demoralized by their confession and conviction; dynamite may have been smuggled into San Pedro from San Francisco
1982: Fort MacArthur placed on inactive status 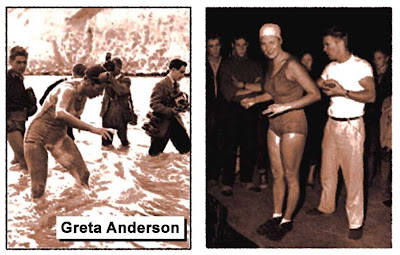 1542: Juan Rodriguez Cabrillo (aka, João Rodrigues Cabrilho) anchors in San Pedro Bay on his flagship San Salvador; names it Bahia de los Fumos y Fuegos (“The Bay of Smoke and Fires”); describes it as “a port enclosed and very good”; this makes the deep water anchorage of San Pedro Harbor (now the outer harbor of the Port of Los Angeles) 468 years old in 2010
1846: Captain Mervine arrives in San Pedro on the Savannah; finds Gillespie on the merchant ship Vandalia anchored in the bay

2010: Harbor Commission gives initial (informal) okay for the Pacific Battleship Center’s proposal to bring the USS Iowa battleship to the Port of Los Angeles as a floating museum and tourist attraction
08 October: 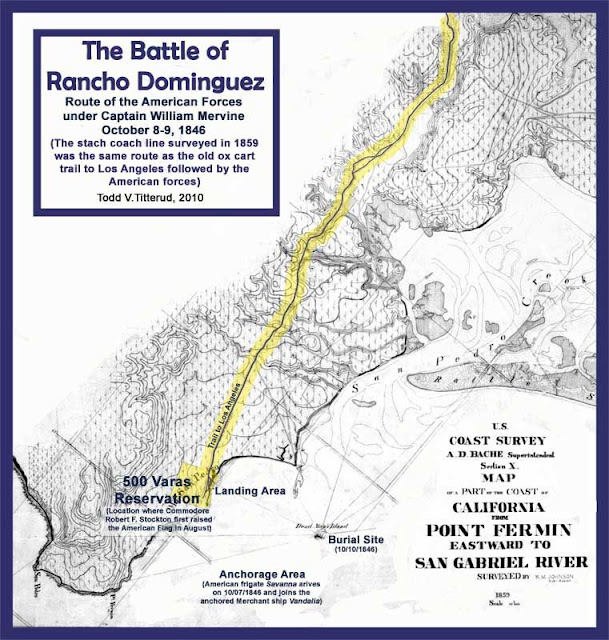 1846: Mervine and the combined American forces from the two ships disembark at the 500 varas reservation at San Pedro and begin marching up the old trail to Los Angeles; by 2:30 pm the exhausted troops make camp on the ranch of Manuel Dominguez (Rancho San Pedro)
09 October:

1846: Battle of Dominguez Ranch; Californios win battle by the innovative use of flying artillery—the “Old Woman’s Gun” is tied to the wheels of an ox cart and quickly moved about by caballeros on horseback using lariats
10 October:
1846: The defeated Americans bury their dead on the Isla de los Muertos (Deadman’s Island) in San Pedro Bay 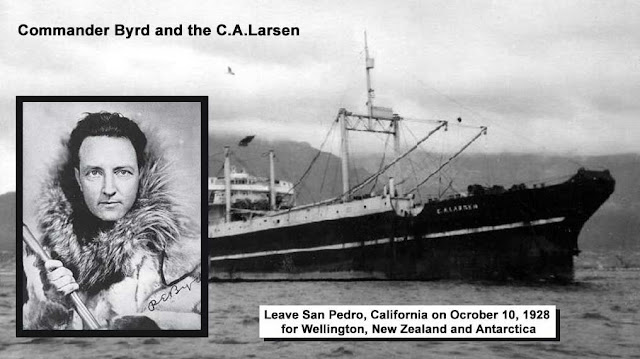 1928: Commander Byrd finishes preparations in San Pedro and leaves on the Norwegian whaler C.A. Larsen for Wellington, New Zealand, on his Antarctica expedition (with 2 young stowaways)
11 October:
1888: 1st organizing meeting of LA’s 2nd Chamber of Commerce; 1st order of business is harbor improvements (just like the 1st chamber)
1901: Brief article published in Science magazine reports discovery of a submerged beach at Santa Catalina 40 fathoms below the surface of the ocean (up to a mile offshore); finding supports theory of A.C. Lawson that Catalina was sinking while San Pedro Hill and San Clement Island were rising out of the Pacific 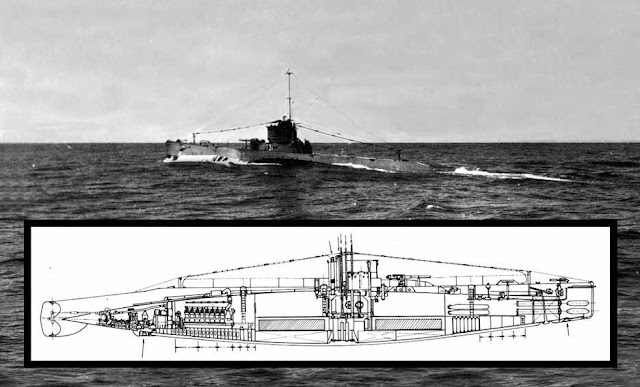 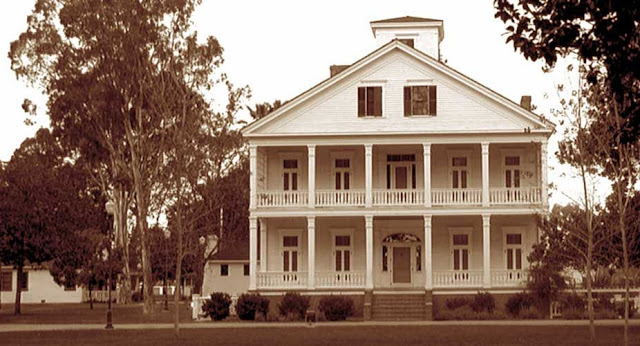 1963: Banning Residence in Wilmington is declared a Historic-Cultural Monument by the city of LA
12 October: 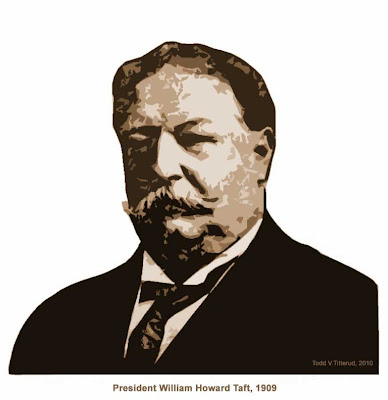 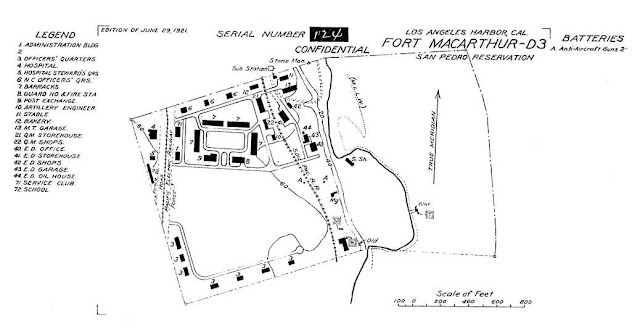 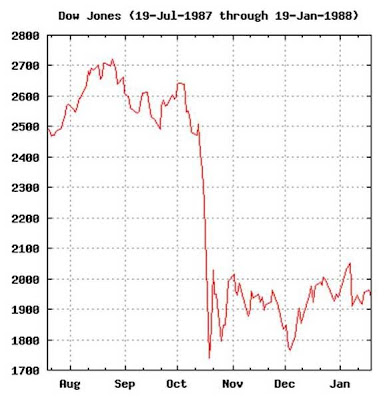 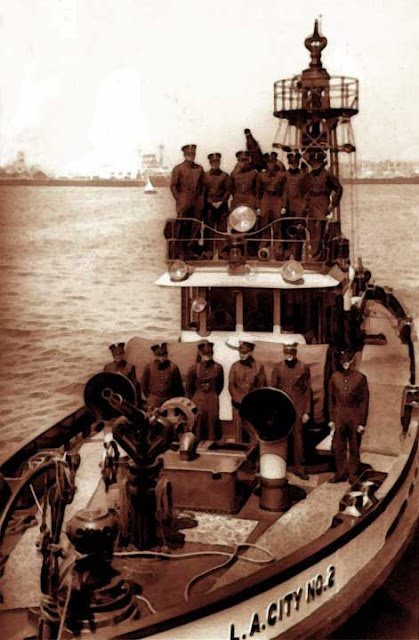 1925: Los Angeles City Fire Boat No. 2 (later named the Ralph J. Scott) is launched by the Los Angeles Shipbuilding and Drydock Corp. at the Los Angeles Shipyard (later Todd Shipyard) in San Pedro
21 October:
1944: Berth 233 explosion and fire in Wilmington; 200’ of outfitting dock severely damaged to a depth of about 30’; caused by the earlier accidental pumping of highly inflammable and volatile toluene into the harbor from the holds of the tanker S.S. Fredricksburg at Berth 151
22 October: 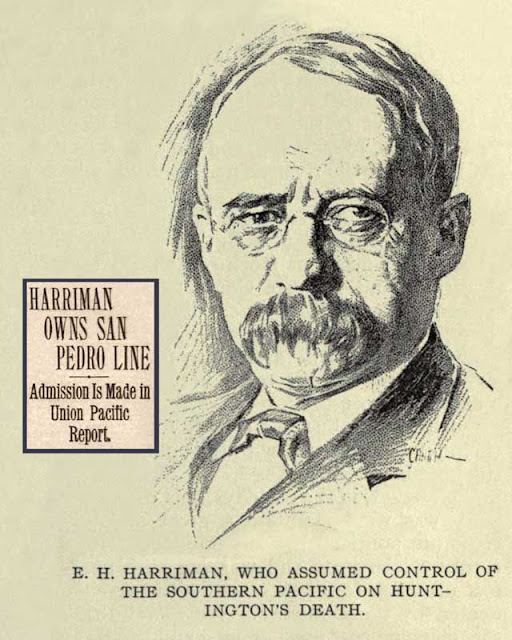 1904: Union Pacific Railroad annual report reveals ownership of the San Pedro, Los Angeles and Salt Lake Railroad; report and subsequent investigations confirm that the Harriman combine has a monopoly over all shipping to and from Los Angeles through control of both the Southern Pacific and the Salt Lake transcontinental routes to Los Angeles and the San Pedro harbor; reveals that Senator Clark (founder of the Salt Lake Route) was no “white knight”; the anti-railroad sentiments of the “Free Harbor” movement in the 1890s will now fuel the successful drive for consolidation 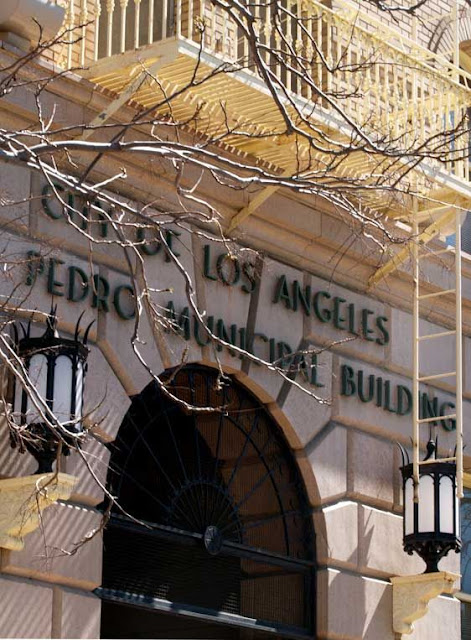 2002: The San Pedro Municipal Building is declared a Historic-Cultural Monument by the city of LA
23 October:

1846: Stockton arrives in San Pedro Bay in his flagship the Congress; he confers with Mervine and Gillespie, raises the American flag at Casa de San Pedro (the old adobe hide house on the 500 varas reservation), and sets sail for San Diego 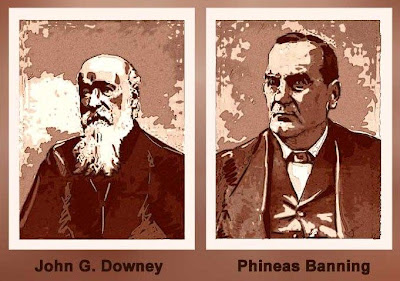 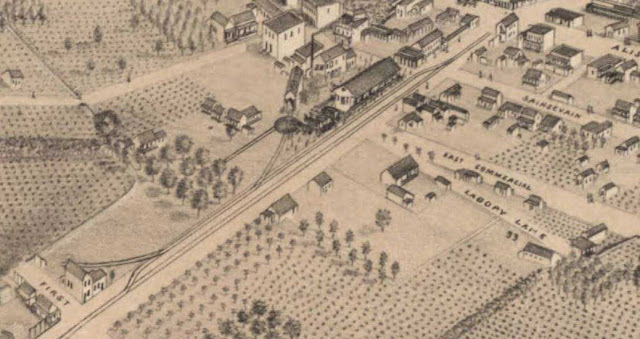 The LA&SP line was the original Alameda Corridor between downtown and the harbor; it ran between Banning’s wharf in Wilmington and the Alameda Street Station in Los Angeles 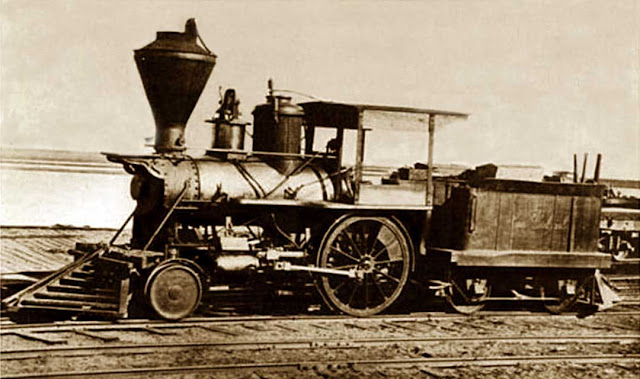 The LA&SP’s San Gabriel was a temperamental engine known for its frequent breakdowns; it was salvaged from the waters of San Francisco Bay after falling off a dock 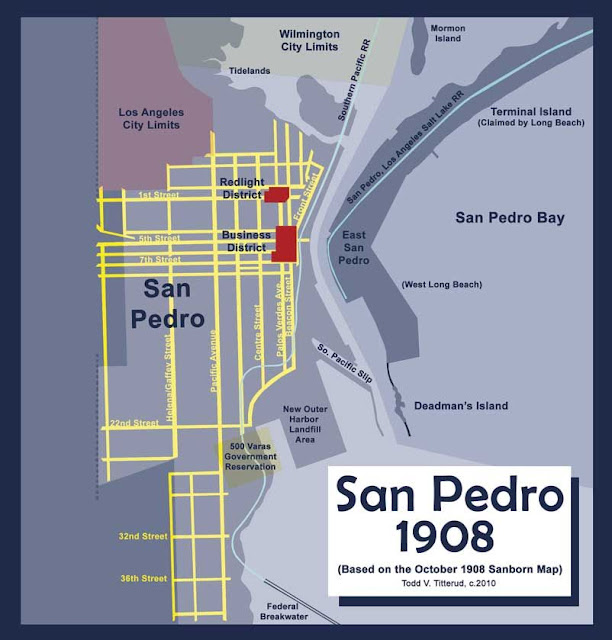 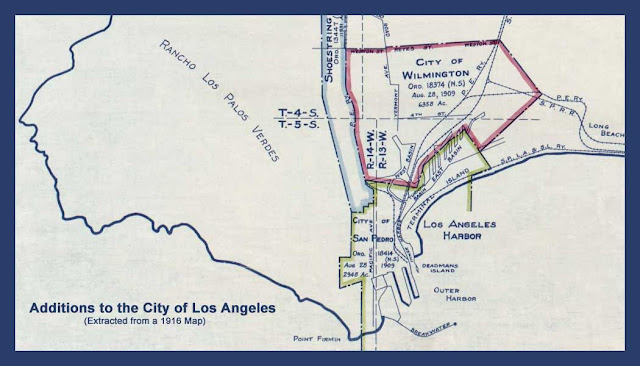 1909: Ordinance passed creating the LA’s Harbor Commission (two months after the voter-approved consolidations of San Pedro, Wilmington and Los Angeles); actual birth date of the Port of Los Angeles; the official birth date is 12/09/1907, when land-locked LA, as shown in the October 1908 Sanborn map (which also shows the old Redlight District of Paradise Valley and the failed attempt by Long Beach to take over all of Terminal Island), created a Harbor Board—but who needs reality when you have a century-old political and bureaucratic fiction?
28 October:
1919: U.S. congress passes the National Prohibition Act (the Volstead Act), initiating the enforcement of prohibition; San Pedro saloons go underground (figuratively and literally); local boat works build speedboats for rumrunners
29 October: 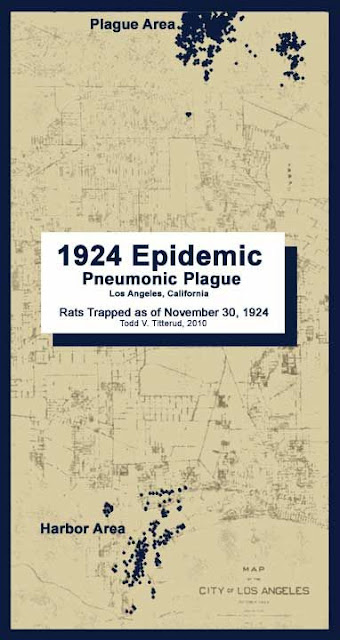 1924: 1st pneumonic plague victims in the Los Angeles epidemic; results in a massive rat trapping campaign in San Pedro and other parts of LA; U.S. Surgeon General orders a quarantine of the harbor on December 22nd (Oakland and New Orleans were also quarantined) 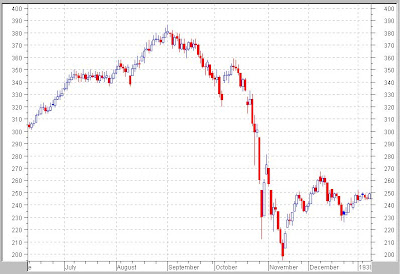 1865: Title to the Drum Barracks property conveyed to the U.S. government by Phineas Banning and B. D. Wilson; in exchange for “donating” the land, Banning and his partners were given exclusive contracts by the federal government and “General” Banning became a millionaire profiting from the Civil War
Posted by Todd Titterud at 3:17 PM No comments:

A banner for San Pedro made from a panorama taken from Friendship Park:

Posted by Todd Titterud at 9:43 PM No comments:

My San Pedro is dedicated to the town I love. A distinctive small town within the City of Los Angeles. From the bay to the hill, San Pedro is a beautiful, historic, and eclectic mix of nature and industry. My San Pedro will include images and history from San Pedro Bay, San Pedro Hill, and the original Rancho San Pedro and Rancho Palos Verdes area which have been so critical to the development of Los Angeles for over 200 years.
Posted by Todd Titterud at 5:05 PM No comments: